My daughter's preschool is having a little Halloween party next week so we're making some goodie bags for all of the kids in her class. She goes three days a week so she'll actually be going to two Halloween parties at her school, so we decided to make bags for both parties. She only has about 8 kids in each class with a teacher and a helper (which is AWESOME!) We love her school and her teachers and feel very blessed to be there because she loves going to school. It took a while to find a good fit, but now we're finally in a preschool we all like and in one we feel works well with what our "preschool objectives" are.

She wanted to put each child's name on the bags so I was trying to think of something cute.  We ended up making name sticks together.  I made something similar to this for Valentine's Day with hearts that my daughter colored instead of rectangles and it came out pretty cute so we decided to try it for Halloween. 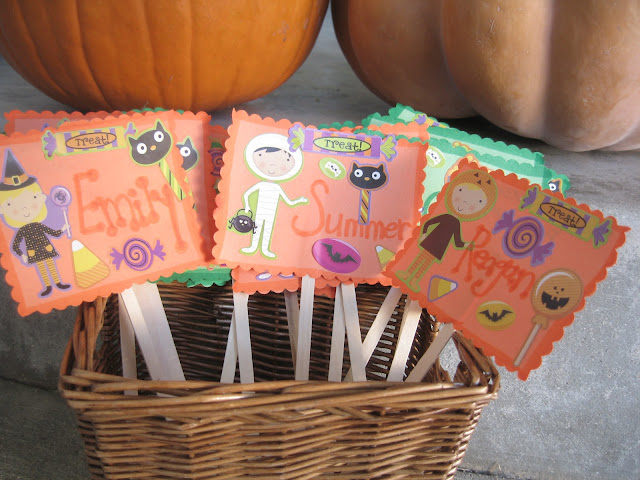 We're going to put them into the bag sticking out of the top with a ribbon tied around the top of the bag and the stick holding them in place.  (See Part 2 - avail soon.)


How To Make Name Sticks

How To Make Them & How To Involve Your Child As Much As Possible:

I used a pack of post-it notes to measure the size of my rectangular name tags making sure that the sticker of the Halloween Kid would fit before cutting them out.  After everything was measured and marked I cut them all out with my crafting scissors. Miss Preschooler chose to use orange paper for the girls and green paper for the boys. After I cut them out I marked along the edges with a colored marker to highlight the cute edge.

I placed the sticker of the Halloween Kid and then wrote the names of each child in her class. Miss Preschooler added the accent stickers around the perimeter of the names.  Mama Preschooler may or may not have "repositioned" a few of the stickers if they were covering part of the child's name. Creative license.

I had her "read" each name to me and she got to choose who got which sticker as their Halloween Kid. These were very big decisions, let me tell you!  We decided that the Mummy Kid (pictured below) could go for either a boy or a girl, and she chose that sticker for her name stick. 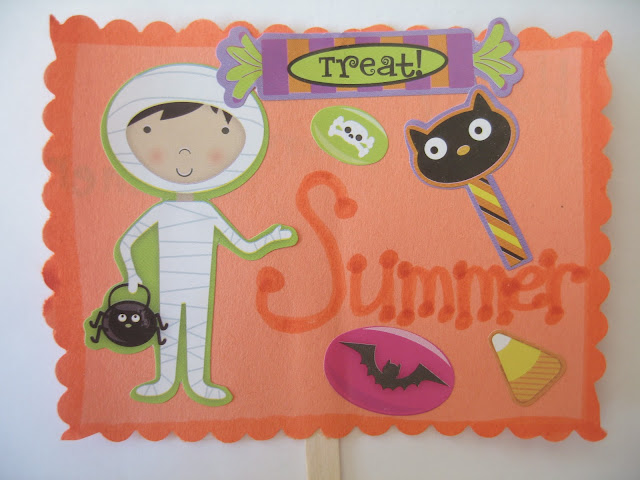 Then we taped each stick to the back with two pieces of tape, "just in case."  I took the tape off the dispenser and held the stick in place and my helper did, "the fun part" and stuck the tape to the stick. After a few she held the stick in place and taped it all by herself. (She insisted.) Mama however, was still the keeper of the tape. I know my audience and we didn't need THAT much tape! After the fact I thought I should write her name on the back so the kids will know who it's from. So please feel free to notice the sloppy writing. (See pic below.) The stick made me do it! 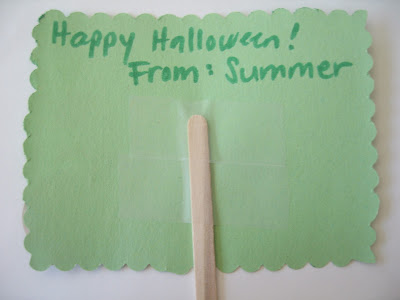 
I ran out of patience for a teachable moment on the tape. Lil Miss Persistent got a little too "wild" towards the end of our project, Baby Brother had just gotten up from his nap and I just wanted to wrap production before dinner so I was all like, "because I said so" about mama holding the tape.  Or something like that. Haha. 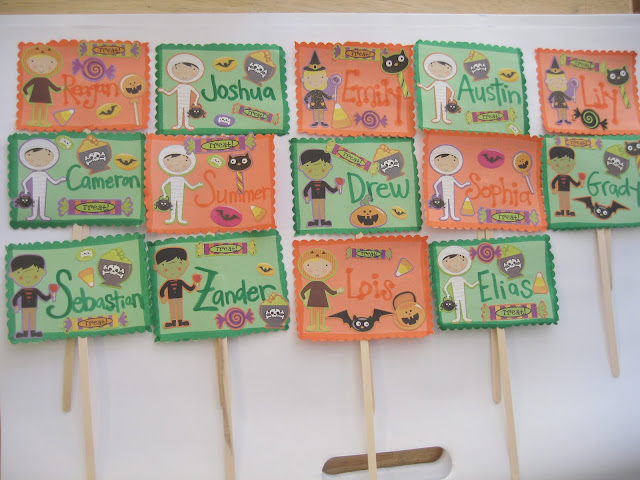 We're all done with our Halloween Goodie Bag Name Sticks and they turned out pretty cute!  Did you find Zander's yet? "Mommy, what is THAT?!"


Side Note
There were a few "Devil Girls" in the sticker pack too, but I decided not to use them. My daughter's preschool is affiliated with a Christian church and I thought that some of the parents and teachers might be offended with it, even though it is Halloween and it's a kid's sticker of a cute little girl dressed up in a Halloween costume. So I ended up making some sticks for our Trick-Or-Treat candy bowl for Halloween night.  I think they are pretty cute. I used to know a grandma who'd say, "Your horns are showing" whenever someone was being "naughty." Young or old she'd say that to you.  It was pretty funny. 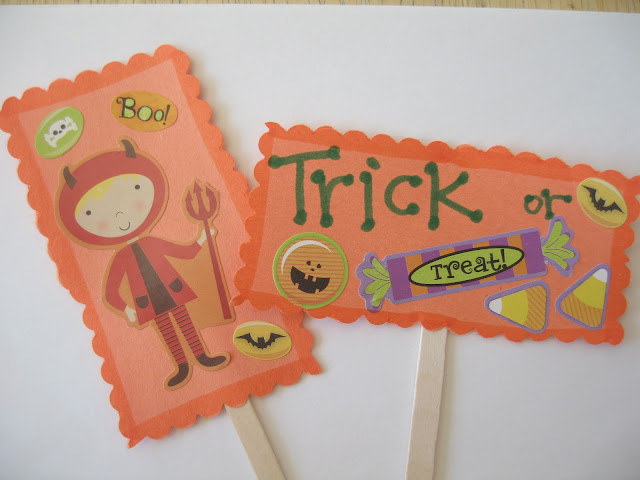 back breaking arms aching mind worn out and tired patience gone days are long somedays I wish I could get fired Laundry is piling an ... 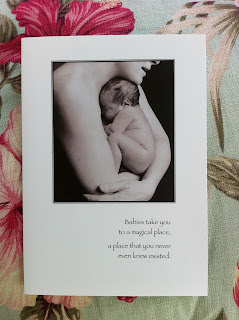