So I'm not "officially" the Trader Joe's Gourmet, but I might as well be. I buy pretty much everything there and a lot of my recipes on here consist of ingredients you'll find at Trader Joe's. If you live in an area where it's too far away or you simply don't have one - GASP! - (my condolences) you can always find stuff similar elsewhere. After all, it's just food. BTW, I completely feel your pain if you like Trader Joe's but you don't have one in your area. There aren't any Trader Joe's in Hawaii and we lived there for a few years when we were first married and it was VERY hard for me to get used to not getting pretty much everything there. We also didn't have a Target. It was bad. I mean, no Target and no Trader Joe's?  You call that paradise? jk.

So, this was dinner last night. I threw it together from stuff I had on hand and stuff that needed to be cooked so it didn't go bad and I also wanted to use some of the cilantro that had just popped up in our garden. The dish turned out to be pretty yummy which is always good when you don't follow any type of recipe so I wanted to post it here so I don't forget how to make it.

*I pretty much never follow a recipe and I usually forget what I've made so I'm trying to make a point to write recipes down so I can make it again.

I don't have a pic of the pollo asada. The next time I buy it I will update this post with a pic. But I bought a package of fresh, marinated pollo asada from Trader Joe's in their fresh meat/poultry section. It was a bit salty - more than we are used to anyway because I usually cook stuff from scratch and I don't add much salt at all. But it was still good. A little too hot for the kids. They didn't eat it. Good thing I had left overs from the other night of turkey, rice and veggies!  Hubby and I liked it though and plan to buy it again and throw it on the BBQ next time. 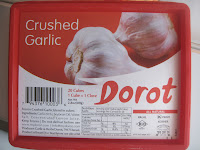 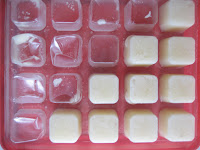 I added in half a bag of frozen organic corn (about 1 heaping cup+)
1 pouch of frozen, precooked rice medley of brown rice, red rice and black barely* (see pic above)
Fresh cracked pepper and more fresh cilantro.
I cooked it until it was bubbling.
*The box of rice comes with 3 (10oz) pouches.

I topped the dish with some shredded jack cheese and more fresh cilantro because that was all we had on hand. Next time I might add some more toppings and I will squeeze in some fresh lime for sure. Can't have enough fresh lime. Yum!

I don't have a pic of the finished dish because it was time to eat. Plus it was the first evening we ate al fresco on our patio since last summer and I didn't want my dish cooling off too much while I went to get the camera. (We have a no cell phone rule at dinner time so my cell was in the house.)

If you make this let me know how you like it and what you did differently.
Enjoy!