My toddler is such an optimist. He's been walking around all day long saying, "it's almost Friday!"  Considering it was Monday, I didn't have the heart to correct him. Even though I don't think he even knows what "Monday" is.  So in typical toddler fashion - and if you know toddlers then you know what I'm talking about - he proceeded to spend the rest of the day telling everyone that it was, "almost Friday!"  And depending on how you look at it, he was right. It was almost Friday - in four days. Glass half full. I like that.

However, Big Sissy was growing tired of all of Baby Brother's "unnecessary" celebrating. Here's how it all went down.

(SIDE NOTE: I'm trying to nip all of the excess fighting in the bud...but this particular argument was kinda funny so it was hard not to laugh while I was telling them to use their nice words with each other.)

(SIDE NOTE: Due to budgeting and time constraints I've edited the actual number of times this dialogue went back and forth. Once again if you know toddlers and preschoolers - especially those who are siblings - then you know what I'm talking about.)

Mom: (behind locked door) "Hey! Quiet down out there! I'm trying to watch last night's 15-hour re-cap episode of The Bachelor on TiVo and finish off these chocolate brownies before daddy eats them all and I can't hear myself think with all that yelling!"

You started to have some serious judgements going on though, didn'tcha? Come on admit it!  I saw your eyebrows raise up. We actually don't even have TiVo, so of course that's not true.

Where were we?  Oh yea - back to the toddler vs. preschooler argument du jour...

Big Sissy: “He keeps saying it's almost Friday and it's not Friday!  It's January!"

Mama: (trying to muffle the laugh-cough into a bent elbow)"Well Birdie, Baby Brother doesn't really know what day it is. He's only 2 years old. He's just saying it's 'Friday' because he's heard us say that before and he's trying out new words so he can be a part of our conversation too. Today is actually Monday. So instead of yelling at him that he's wrong, let's try to teach our Baby Brother with our nice words that today is Monday but that Friday will be here soon.... OK, Love?"

Big Sissy: (to Baby Brother in the sassy voice reserved for 4 year olds who are trying to "school" their baby siblings) "It's not Friday, Bay. It's Monday.... AND it's January!"

Mom: (oh yea I forgot - mom brain) "Actually Birdie, it's February. Last month was January and this month is February. That's why we've been making our Valentine's Day cards for school because our Valentine's Day party is February 14th, remember? Next month it changes again and it will be March.... And we're using nice voices with each other, please. If not, then you will be choosing to have some time away from playing trains to cool off.

Big Sissy: (in her nicest, big girl 'teaching voice') "It's not Friday, Baby Brother (caressing his cheek to soften the blow of bad news) it's actually Monday - Feb-boo-r-air-y. January is over...(shakes head) It's gone, Bay Man. Gone forever. And Friday is in 8 days...OK Love?”
Baby Brother: (running the other way with his sword in the air) “Hey-evy-body! It's Almost Friday!”

Mom: (walks into the kitchen looking for pan of chocolate brownies - thinking of ordering TiVo.)

Are you following @coco_cana on twitter yet? She doesn't really know how it works so it's kinda funny watching her flail around over there. Good for a laugh. 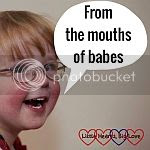