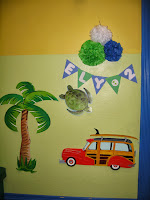 When my son turned 2 we threw him a sea turtle themed birthday party. Of course since our family lived on Kauai for a few years we can't call sea turtles anything but Honu. When our lil guy was taking swimming lessons we'd say, "Swim Baby Honu, Swim!" (We still say that actually, haha.) So when I saw the most adorable Sea Turtle party decorations at a party store I knew I had to get them!  It's a good thing he was still technically a year old when I was shopping for party stuff and he didn't have a set opinion on them. That all changes at 3.

Here are some of our simple ideas for the party:

I made the "banner" myself out of construction paper. I traced the letters of his name with a stencil and added some Honu stickers that I bought with the decorations. I love buying the stickers that come in the pattern of the decorations. You can use them for so many things!  The "banner" isn't even strung together. I just taped them close together. I bought the Honu picture and the palm tree at the Dollar Store (they are seasonal items.)  I made the tissue pom poms myself. The woody is a one-of-a-kind item though. My mother-in-law is a talented artist and she painted that for his bedroom. We have a surfer/beach/honu theme in his room as well.

You can move the girl off the island...

Anyway, so my MIL found a woody and took a picture of it and painted it on that thick foam poster board and then used a razor to cut around it. She was like, "it was no big deal. Just an easy little art project."  Right!  I'll leave it up to the experts. But it was a big hit for our guest picture wall and now it hangs in his room. We think it's awesome! 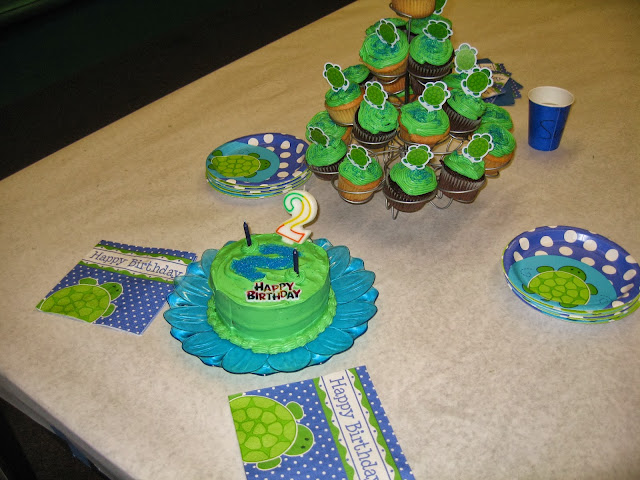 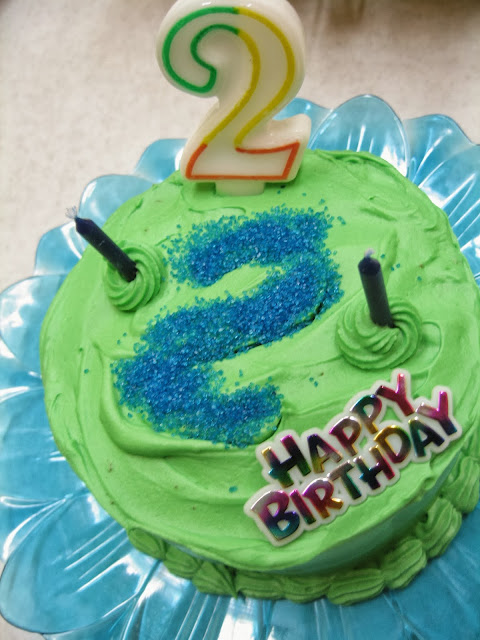 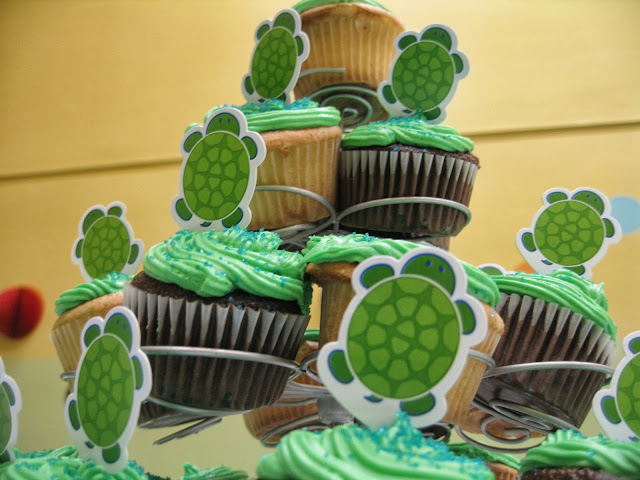 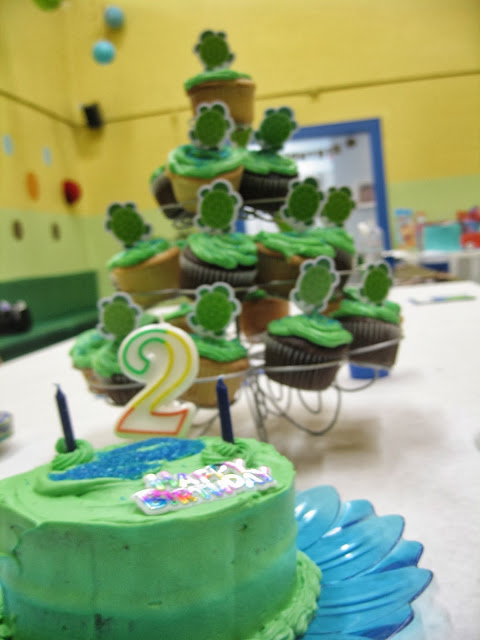 Grammy baked and decorated all of the super yummy, homemade vanilla and chocolate cupcakes and the "Big Boy Cake" too, as our lil guy was calling it. For other parties I have made my own cupcake toppers but I couldn't resist buying these lil guys. They were just TOO cute!

Our simple lil Honu birthday party for our Baby Honu turned out super cute and a lot of fun for the kids!

Kids Party Tips:
I'm a firm believer in keeping parties small and only inviting the kids your child sees often and enjoys playing with. This takes a lot of restraint on the parents part. Mainly mama. When the babies are a year old you can get away with inviting everyone on your list (all of the family members, friends and adults who don't have kids as well as all of your friends with kids all various ages.) When your child gets older 2 and 3 and above you should really try to stick to close relatives (grandparents and close cousins) and children your child already knows as well as kids in a similar age bracket (unless they are the sibling of your child's friend.)  For very little children I recommend sticking to a 2 year age bracket if possible. This usually means for a 2 year old it's ok to go up to 4 years old. An 8 year old will be totally bored at a party for a 3 year old regardless if it's your very best friend or not. And trust me, they will want and expect to be entertained!  Not kiddie games either. The difference of only 1 year even can make a HUGE difference with a group of very young kids playing together. This is good to keep in mind when you are planning to have age appropriate games (geared for the birthday child) and a piñata, etc.  A 5 year old will dominate everything at a 2 year olds party (and probably knock kids down as well) and it won't be fair for either child. Don't put children in this situation and then expect them to be perfect angels. It will end in tears.

Unfortunately, we went to a party once where my child no longer 'knew' the birthday child because it had been so long since they had seen each other (even though they played a lot as babies) and without going into detail, it didn't really go well because we were the only ones the birthday child didn't know really well. So it was crazy awkward for everyone. It wasn't their fault, they were just a child, but I should've listened to my gut when I was having doubts about going.

The hard thing about that is that (thanks to Facebook) every single person who is a friend of yours with a child will expect to be invited to your child's party. This doesn't mean you should invite them. Less is better - for you and especially for the birthday child.  Birthday parties for children are overwhelming because there is a lot going on, it's usually a sugar free-for-all and it's total party overload so try to think of ways to make it easier for them.

And having to stop playing with kids you do know to come over and give hello/goodbye hugs to kids you don't even know or don't remember isn't fun either (even though you've known the parents for a million years and you have pictures of the tow of them hugging and playing. They don't remember it. Invite them to YOUR party!)

However, there is always going to be the, "I feel obligated to invite (fill in the blank)" maybe even a few - and that doesn't have to be as negative as it sounds. But ask yourself this: Would you invite this person and their child over for a one-on-one playdate with just you and your child?

If the answer is no then you have your answer for your guest list.

If you don't quite know how to let your friends know and you plan to share your child's party pics on facebook, etc., then you can blame it on the family budget why you are keeping it small. EVERYONE should be able to relate to that one. If not then I'd like to know your secrets.

You can then say, "due to our tight family budget we have decided to keep the party very small so we are only inviting the kids we see all the time in his weekly playgroup/swim class, or her best buddies from school, etc."

We are in the process of getting ready for another birthday party around here and we are keeping it even smaller this time. Thanks to Pinterest children's birthday parties have gotten really out of hand lately. It inspired me to write this:

Remember, less is more. Children will entertain themselves with a few good buddies and an open space to run, some chalk and some bubbles and toys you usually bring out when friends come over. You don't need to provide them with fabulous entertainment every minute of the party.  There is a saying to keep the guest count the same number as the age of the child. When they are ages 2-4 this can be kind of hard because you might have some really good friends you see weekly at a playgroup or something, but still try to keep it small if possible.  I hate to be harsh, but the total spaz kid who is a tyrant at playgroup becomes 10 times worse when there is sugar, excitement, overstimulation and another child's brand new toys involved. (Which brings me to an important point: Open all gifts after everyone goes home. Parents will understand.)

Remember this motto: Would you invite this person and their child over for a one-on-one playdate with just you and your child?  If the answer is 'no' then you have your answer for your guest list.

Have fun and party on!  Oh yea, I'm on Pinterest now. I have been pinning ideas for our next birthday party. Can you guess what our theme is going to be?  Check out my Pinterest party board called,

Thanks for stopping by.